skip to main | skip to sidebar

We have had over 1000 calls this year. Thats the most we have ever had. Fire calls here and there but mostly rescue calls.
Posted by CHG at 9:21 PM No comments:

Unfortunately, the Clubhouse Gang has not spent much time at Station 2 this year. However, there has been a number of calls run out of the station so far this year due to some key members responding there consistently.

This summer started off with a bang in May with a house fire. Every time a storm blew thur Ozaukee County it seemed that a building in Mequon was hit by lightening causing a fire. Grafton had a significant house fire in the middle of July. The Forth of July generated many rescue calls and so did the Ozaukee County Fair. Now in the last week and a half there have been two working fires. One was in the city and relatively small. The second one was a barn fire in the town and one of the bigger fires in the last five years.

The city fire was a MABAS 1st alarm fire. The barn fire was a MABAS 3rd Alarm fire with a 5th alarm tender response. In both cases the summer weather made conditions difficult on the fire ground.

Today is the 5th year that Station 2 has been officially open.

During the past week many things occurred. 163 was put back into service two Saturdays ago with a new hose load. Maxwell St. Day was last Sunday and seemed to be a good event. Three calls were run out of the station also. The last call being on Saturday night was a haz-mat call. 163 and 158 rolled. All the engine companies and 158 just stood by and waited for Ozaukee haz-mat and then Milwaukee haz-mat teams to arrive. The incident lasted about 2 1/2 hours.
Posted by CHG at 2:09 PM No comments:

163 is back in Cedarburg. It will be put back into service on Saturday.
It was a busy day today otherwise. The radio room is another set closer to being complete with some new technology. Station 2 got some bottled water delivered to it. 163 also was washed and got new seatbelts installed.
Posted by CHG at 10:34 PM No comments:

The Clubhouse Gangs mojo has been seriously hurt over the last few months. Engine 163 has been out of service since late February to receive a new water tank. However, it should be back in service in the next week. Without an engine there has been no point in going out to stand guard and the Brewers have not been entertaining to watch. In the time that Engine 163 has been gone there were three working fire calls. The last two occurred in the past three weeks. One call was for mutual aid to Grafton on a lightning strike, the other call was a house fire on the east side of Cedarburg. Both fires were taken care of quickly by the responding crews.

The summer will be upon us soon. Since there will not be any new trucks to put together it seems as though it could be a quite summer, outside the fact that Washington Ave. is all torn up. Also the beginning of June will mark 5 years of Station 2.

Postings should be more regular now that classes are done.
Posted by CHG at 11:29 PM No comments:

Not to much has happened since the last post. A fire at the Country Keg and a few grass fires are all that have happened.
Posted by CHG at 9:19 PM No comments:

It has been awhile

Well it has been three weeks since the last post and there was some outrage over the lack of updating.

To begin just as the last post was being uploaded a fire call at one of the nursing homes came across the wire. It seemed that from the reports coming from the dispatch center that a room was involved in fire and had got into the attic. With this report those of us at Station 1 got on Engine 163 and headed south. Upon arrival a moderate smoke condition existed in one of the wings. A 2 1/2 line was pulled into the building along with apartment packs. After about an hour of investigation it was determined that something burnt up in the HVAC unit for the wing and crews cleaned up and returned to quarters.

Other than that the month of January was slow. A majority of the calls were rescue. If a map was used plot our calls most of them would be located on the south side at a certain complex and to our neighbor to the east.

Things have been slow around the Clubhouse as well.
Posted by CHG at 9:21 AM No comments:

Learn More About the CFD 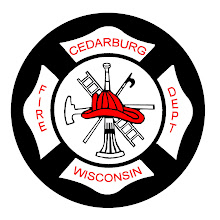 The Clubhouse Gang is a group of six volunteer firefighters that regularly staff CFD Station 2. The apparatus that is at the station is Engine 163 and Battle Unit 158. The station is located on the west end of a small grass surface air field. 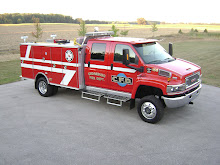 This vehicle can serve to many purposes to be called anything else. 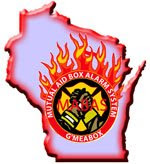